Do the Hustle: Overcoming Hardship Through Hard Work 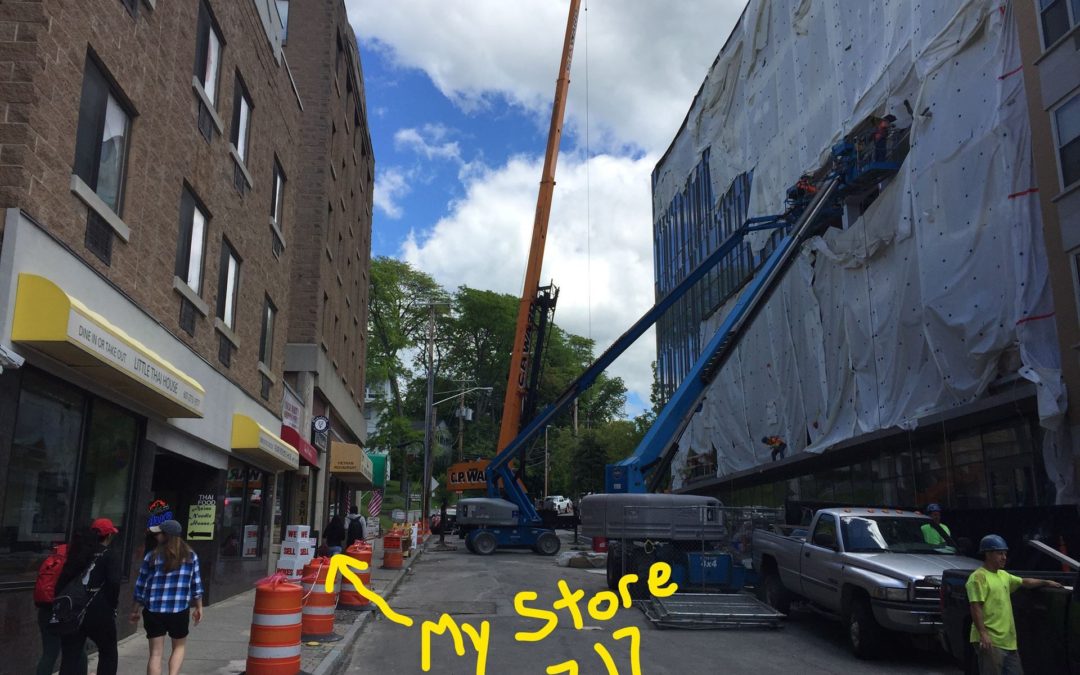 The month of May is my busy season, and it’s just winding down now.

My shipping and storage business is in a college town and, as graduation approaches, the students—the majority of whom hail from lands far away—all move out in a mass exodus peaking on Memorial Day weekend when my local university, Cornell, holds its graduation.

In 2012, my first May season at this location, I decided almost on a whim that I’d open my store on graduation Sunday and the day after, Memorial Day—days on which a shipping business would traditionally be closed. I expected some business. After all, thousands of guests were convening on our little city for Cornell’s commencement and we’d been very busy with student move-outs and storage for a week or two prior. But I didn’t expect anything near what we experienced that weekend.

Memorial Day 2012 set a daily sales record that held for five years, and a daily customer count record that remains unbroken. All day long, graduating students and their proud, often overbearing parents came in to buy boxes and ship their belongings to faraway places. Most students were so overwhelmed with planning for graduation that they totally forgot to plan for moving out! Many had flights leaving that day or early the next day and we were one of the only places in town open on the holiday weekend. By the end of that day, we had outgoing shipments stacked floor-to-ceiling, from the front of the store to the back, with an ever-growing-narrower aisle for people to get from the front door to the front counter. It was epic.

In years since, other shipping outlets in the area have caught on to the Memorial Day opportunity, though that weekend still remains far and above my busiest weekend of the year, much bigger than the week before Christmas when a traditional shipping store would see its peak.

In May of 2015, starting just days before graduation, we were quite surprised when demolition crews arrived, blocked our road, and started leveling the vacant buildings and houses that were across the street from us. My store is on a dense city block, not in a strip mall, so there is no parking lot or back door access; we depend completely on our curbside front door and the loading zone that always was just outside of it. But now our entire block was cut off. Business, which should have been booming that week, tanked. Instead of going insane with shipping, we were standing outside our front door watching buildings crumble and pedestrians staying as far away as possible from the construction zone we found ourselves in the middle of. I had a very poor Memorial Day that year, down 30% from 2012.

You see, our neighborhood had some zoning changes and, when they were approved, a number of very large development projects that were on hold suddenly had the green light to start. These projects will ultimately be a game changer for our neighborhood, ushering in significantly more foot traffic, businesses, and residents. It’s going to be great! But the growing pains of getting there have really hurt.

Construction has continued since that May, leaving my street effectively closed for over two years. It has been a serious challenge. But the loss of a road and a loading zone doesn’t just affect a shipping business like mine, it also affects any business that gets things delivered or sent out, depends on drive-by traffic to see their storefronts and window advertisements, and depends on pedestrians who are wary to walk on a block under so much construction. In other words, it affects every single business. We’ve lost some business neighbors because of the conditions, and that makes my heart ache.

A few years ago, I co-founded the Collegetown Small Business Alliance. Through it, I work with my neighbors, contacts in our city administration, and local project managers to find solutions to the challenges that all of this major development packed into in just a few small city blocks brings. This is new territory for everyone and only through increased communication and understanding will we find compromises that permit work to continue, completing as fast as possible, while still allowing the small businesses and residents in the affected areas to function. It’s a balance we haven’t quite struck yet, but we’re working toward it. And things have certainly gotten better recently, though the road is still closed the vast majority of the time. But we now have better warnings when something will happen, open discussions, and better awareness of all parties’ perspectives and the scope of current, pending, and proposed projects. I’ve personally found that developers, site managers, and city staff can be incredibly reasonable—and sometimes downright delightful—if approached in a positive, solution-based manner; I’ve learned that making friends is far better than making enemies; I’ve learned that, if you ask nice enough, construction workers are more than happy to use their big forklifts to load and unload your pallets from the freight trucks that had to park on another block.

We have a long way to go in our neighborhood. Some of the biggest projects haven’t been started yet and many of the utilities that are underneath the roads still must be upgraded. There will be lots of digging, dust, and disruption for a few years to come. But, when it’s completed, our neighborhood, which serves as the grand entrance corridor to Cornell, will be bustling and beautiful—a walkable part of the city with wider sidewalks, bike lanes, landscaping, and a plethora of shiny new buildings.

But, my rose-colored glasses aside, the reality is that it’s been extremely tough to make it through the past couple of years. To allow my business to survive, I stopped my regular salary, which admittedly was still menial as a new, budding, growing small business, and began only paying myself the minimum amount possible as infrequently as possible. I had just started finally paying myself the year before this all happened, so I was used to living with little to no income, living instead off of rental income from a small property I have … and a few loans. It was a sacrifice I didn’t want to make, but one I had to make, keeping the long-term goal and bright post-construction future centered in view.

I also put off hiring a staff. In my original business plan, I hoped to have a couple of employees by this point, allowing me to focus a little more on new projects, new profit centers, and maybe new locations. But that had to be put on hold, and I’ve been running the business solo, as lean as possible, with invaluable assistance from the best family and friends anyone could ask for.

I had to think about and plan for opportunities that will come about because of the new developments, putting whatever resources I saved into investing for the future. Directly across from me will soon be completed a giant new building that will house Cornell’s Johnson School of Management’s graduate MBA program. Yes, an academic building will be my new across-the-street neighbor, full of working professionals going back to school on nights and weekends, faculty, staff, and offices filling each floor of the glowing, glass-faced, open-24-hours monster that is now all I can see from my front window. It’s going to be glorious! After all, those people will all want to rent a private mailbox at my store, use me as their go-to FedEx site, and discover that my printing prices and quality are far better than anywhere they’ve ever been. Soon, they’ll all be my loyal clients. So, I’ve had to prepare for that and now I have a few new banks of sleek mailboxes ready to rent and other investments that I’ve scraped to make in order to accommodate what I know is coming soon. I also tried to lease the vacant storefront next door to me, imagining breaking down the partition wall and expanding with a new business center to serve the new buildings, however my landlord had other plans for the space.

But there was more that I could do. If customers couldn’t find me through the construction dust, then I was going to find them. So, I put everything I could into advertising, hitting social media hard, bumping up my weekly ad size in the university paper, doing some radio, regularly postering every local and campus bulletin board I can find, and creating a refer-a-friend campaign. My best advertising has always been word of mouth, so I do what I can to encourage those conversations.

And when customers couldn’t get to me through the torn-up, blocked, and crane-filled road, I decided I would go to them. I’ve always offered pickup and delivery service, but now it’s a daily occurrence with a fourfold increase this season over last. Often, I close my shop at 6pm and head to customers’ homes and businesses to pick up their boxes to ship or store and bring them back to my location to process in the morning. Or, I get to my store early so I can do pickups before my 9am opening time. The majority of my storage and shipping sales are now a result of pickups that I do, most involving carrying heavy boxes, bins, and suitcases up and down winding staircases in dorms, creaky old apartment buildings, and pretty new residential complexes. And during the busy few weeks in May when my saintly retired mother comes in every day to hold down the fort, I’m often doing pickups all day long. It’s exhausting, but it’s necessary.

One personal expense that I haven’t cut are my monthly massages. I consider them a necessary medical expense, as important to my personal health and mental health as the yoga classes I also refuse to give up. Regular massages have significantly helped my migraines, and fewer migraine days makes life so much better! But I digress: the point of this statement is that last Thursday, just a few days after my record breaking Memorial Day, I hobbled into the massage studio like an old man—aching and bruised from a killer week of box schlepping. My therapist took one look at me and simply said, “I’ll fix you.” I told him about the arm that I was convinced was falling off because the muscle I pulled in it earlier that day by lifting something entirely too heavy was throbbing. I told him about the wrist that still hurt after I fell on it a few days earlier when I tripped over a bin of books some student decided she’d put right in my path as I navigated narrow halls and garbage-filled stairs carrying oversized boxes out of the filthiest sorority house I’ve ever seen. I showed him the bruises on my thighs where I rest boxes while trying to open the series of doors that inevitably lead out of each apartment I pick up from. And he commented that the knots in my back were … well … extreme. Indeed, this season beat me up more than any other before it.

Business had been down since construction started, and it hurt. But I wasn’t going to stand for that, so I shifted my business plan, adjusted my business model, and seriously hustled. As a result, 2016, a year completely without a road, showed 16% growth over 2015, the year in which sales tanked halfway through when block demolition knocked us for a loop. And last Monday, Memorial Day 2017, I broke my 2012 Memorial Day record for most sales in a single day by 16%. For the month of May, this year I was up 32% over last year and 17% over my previous best May ever, which happened in 2013. And it’s all because I made tough decisions, made sure every single customer left my store grateful that they did business here, and worked my tail off.

I hustled. I really, really hustled. And it was worth it.